According to the latest figures published by Johns Hopkins University, 5,411,498 cases have been detected worldwide, with 345,122 deaths and 2,169,958 people now recovered. 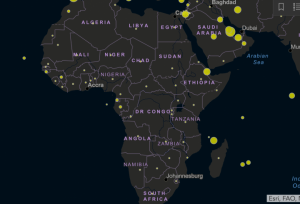 Writing for the BBC, the journalist Zeinab Mohammed Salih says the new Sudanese government has “failed to provide leadership” during the coronavirus pandemic, with cases now over the 2,000 mark in the country – the highest in East Africa.

The fall-out from the coronavirus could have a bigger impact on people’s lives than the actual virus itself with Africa in a particularly vulnerable position.

A look at how Sudan’s new leaders have been exposed due to coronavirus by the BBC. Sudanese migrants returning to the country were put in quarantine but left early and might have been the reason for the spread. Inflation has reached 100% and neither the Prime Minister nor the Minister for Finance has appeared publicly to calm nerves or sympathise with millions of struggling families.

President Cyril Ramaphosa announced on Sunday a further easing of South Africa’s coronavirus lockdown from June 1, allowing the vast majority of the economy to return to full capacity.

Africa’s most industrialised economy has been largely shut down since late March, when the government enforced severe restrictions to stem the spread of the novel coronavirus which has so far infected 22,583 people and killed 429.

Ramaphosa, who has been under pressure from rival political parties and a variety of industries to ease the restrictions, said following broad consultations the cabinet had decided to move the country to “level three” of its five-level lockdown system.

“This will result in the opening up of the economy and the removal of a number of restrictions on the movement of people while significantly expanding… our public health interventions,” he said in a televised address.

When The Front Light Goes Off At Night