Lawyer Williwise marks 3 decade as a Lawyer.
On Motivational Hour, a show hosted by Rev. Felix Baidoo (General Manager K-Nas school complex), Mr Williwise Kyeremeh, a former Judge and the Proprietor of Wise Educational Complex said, he started practicing as a Lawyer on 02-11- 1992 and the rest is history. 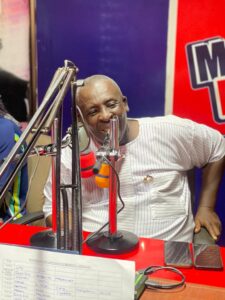 Using his life as motivation to others, he said it’s been hard work and perseverance. He revealed that he had his secondary school education at Akyirensua (ACHISCO). He added that, the Youth should not seek for “quick money”.  To him, such mentality will push the youth into money rituals and other ungodly ways of getting money. He beseeched the youth to work hard and they may even be successful than he is now.
Talking about his School, he said on that he establish Wise Educational complex, a private school that is changing the face of education in Sunyani and Bono region in 2006. The seasoned Lawyer and Educational entrepreneur uttered that, all these success is possible because of his wife. He said God is blessing him through his wife.
Marking 30 years and 16 years as a Lawyer and a Proprietor respectively, he said he is so grateful to the most high for all these and a healthy life.
To end the interview, Lawyer showed his dancing skills to praise God for where he has brought him in life today.
Tags: moonlitefmsunyanisunyaniwilliewisewilliewisekyeremehwiseeducationalcomplex
Share3Tweet2Share1SendShare

ADDRESS BY H.E. JERRY JOHN RAWLINGS AT A VIRTUAL DURBAR TO MARK THE 41ST ANNIVERSARY OF THE JUNE 4 UPRISING.