If Brazil were too big a team for him to implement his plans to perfection, a Nicaraguan side that lie 139th on the World Ranking should give him no such headache.

Following the disastrous display against Brazil, there have been calls for changes and below are five things Otto Addo must do in Tuesday’s game.

Though he cannot be solely blamed for the goals conceded against Brazil, there is a feeling that Jojo Wollacott is not really up to scratch. He appears to lack the confidence and presence to command the goal areas. With the game being a test match, Otto Addo should try Richard Ofori and Manaf in the post. 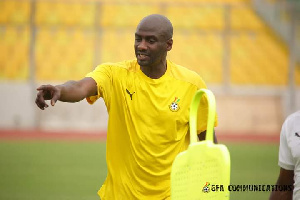 Baba Rahman and the Ayew brothers were the most vilified in the aftermath of Ghana’s drubbing at the hands of Brazil.
Many believe that the three players do not deserve to be in the starting team as they have consistently failed to perform in Ghana jersey.

Whiles some disagree, it will be right that Otto Addo protects from the public attack by not playing or starting them.

Learn to defend and score from set-pieces

Two of the goals that Ghana conceded against Brazil were from set-pieces. The mistakes were elementary as on both occasions, the Brazil attacks had a free run to attack the ball.

Otto Addo must show that it has taken notice of that by working on it in training and showing the result during matches.Additionally, the team must also learn to create chances from set pieces they get. Set-pieces have now become an important avenue for goals.

Give Elisha Owusu, and Afriyie Barnieh a chance
In his brief cameo against Nigeria in March, Elisha Owusu gave an indication of what he could bring to the team.
He has however not had enough time to fully convince Ghanaians that he merits his call-up.

Afriyie Barnieh also deserves his chance to show that he was not just called up to make the numbers but as a potential candidate for the World Cup.

ADDRESS BY H.E. JERRY JOHN RAWLINGS AT A VIRTUAL DURBAR TO MARK THE 41ST ANNIVERSARY OF THE JUNE 4 UPRISING.