South Korean club FC Seoul have received a hefty fine for using sex dolls instead of mannequins to fill empty seats during a league match on Sunday.

The club placed dolls in seats during a K League match last weekend to make up for the absence of fans due to Covid-19 restrictions.

“The disciplinary committee decided to take heavy disciplinary action considering the graveness of the incident, caused by the ‘real doll’, that has greatly insulted and hurt female and family fans and to prevent similar incidents going forward,” K League said in a statement. 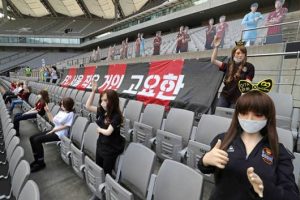 However, viewers watching on television quickly pointed out that they looked more like sex dolls than mannequins and that some of them were holding placards bearing the name of an adult toy manufacturer

The club apologised on Monday, saying they had failed to check the consignment sent by the supplier and that they were not aware the dolls were “adult products”.

“We would like to apologise to the fans,” FC Seoul said in a statement on Instagram. “We are deeply sorry about the mannequins that were seated during the May 17, 2020 match.

“However, we would like to clarify that while these mannequins have been made to look and feel like real humans, they are not for sexual use — as confirmed by the manufacturer.

“We had them supplied by a company… which claimed they are clothing mannequins. We double- [and] triple-checked that they are not for sexual use.”

Apraku My Daughter is dead.

Apraku My Daughter is dead.

When The Front Light Goes Off At Night